skip to main | skip to sidebar

We are very excited to be able to provide even more fantastic new features on www.youyou.co.uk. Not only does this allow you, our clients, to get the most from it, it has made it far easier to navigate.

These improvements have made it possible for both jobseekers and companies to take fuller advantage of this unique way of recruiting. We have made it even more affordable for companies to fill their vacancies – just £295 + VAT! Jobseekers as always can create a profile and use the site for free!

Revolutionising secretarial recruitment in the UK by creating many more reasons to use YouYou.

We strive for the best in everything we undertake and by using our site you are guaranteed our commitment to your needs.

Chance UK is celebrated as Britain's most innovative charity! 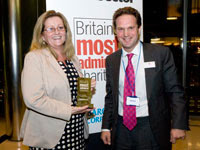 We are proud to be one of the innumerable supporters of Chance UK, a London based child mentoring charity, now hailed as Britain’s most innovative charity. It is their determined focus and application to their mentoring model that has won them this accolade and resulted in their rolling out the model to other parts of the UK. They now run not just two offices in London but projects and partners – another highly innovative aspect of Chance’s work - in Liverpool, Monmouthshire and Yorkshire. Their single-mindedness is admirable and has been the foundation of their indisputable success.

Gracia McGrath, Chief Executive, said, ‘We have concentrated on our model. A lot of people have approached us and asked if we could also work with different age groups, but we wanted to put all our powers into improving the model we had. For a while, ‘specialism’ was a dirty word, but we ignored that. It allowed us to focus on who we weren’t getting to. Straying from its mission is the worst thing an organisation can do.’

Such concentration and dedication has paid off and the programme really does work. It achieves fantastic results - 98% of children who are mentored once a week for one year achieve an improvement in their behaviour and 50% come out of the programme with no behavioural problems whatsoever. The mentors of Chance UK (all volunteers and over 50% of them men) work with children between five and 11 years old, boosting their self confidence through organised activities, in order that they can make more constructive choices about their lives. Naturally Chance targets those children who are seen to be now or in the future, vulnerable to the more destructive and ultimately criminal side of life. Not only this, but they give an incredible amount of support to the family of the child too.

Their work is an inspiration to us all!

Hilly
Co-founder of YouYou www.youyou.co.uk. Having worked in recruitment for the past four years I have created YouYou, an online office support recruitment tool - find a new employee or a new job!